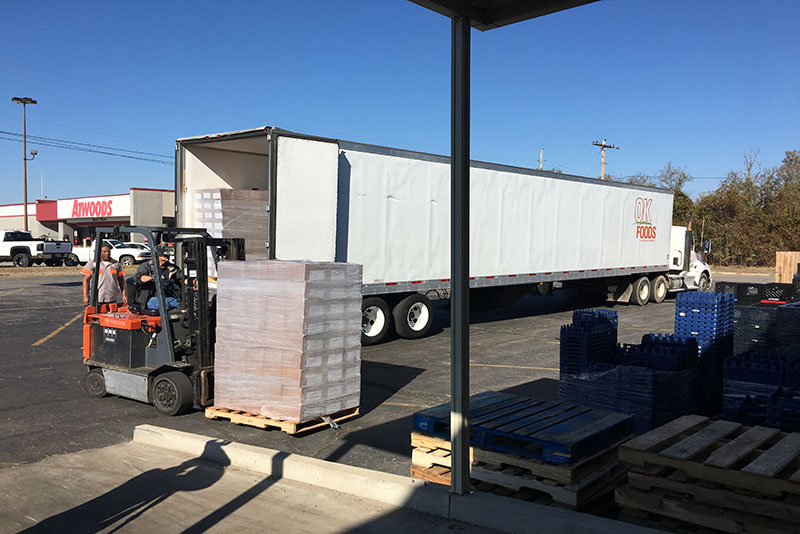 The River Valley Regional Food Bank received 27,750 pounds of frozen chicken meat Tuesday as part of Fort Smith-based OK Foods’ prior pledge to provide a half-million pounds of chicken to the food bank over five years.
The first donation will help provide 125,000 meals to families in the Fort Smith region. The food bank, a member of Feeding America, is located at 1617 South Zero St. in Fort Smith. Ken Kupchick, marketing director for the food bank, showed 14 pallets of frozen meat, half cooked and half uncooked, Tuesday in a new freezer supplied by a partnership between Tyson and Walmart.

Sebastian County has a child food insecurity rate of 30 percent, totaling 6,700 children in Fort Smith alone, according to Kupchick.

OK Foods President and CEO Trent Goins said it is the company’s goal to “nourish the world,” but that begins by “nourishing the most vulnerable in our local community,” Goins said in a news release.

Working in conjunction with the Crawford-Sebastian County Community Development Council, the food bank recently completed renovation of a former grocery store on Zero Street that allows 10 times more refrigeration space and four times more freezer space than the prior location.

“The new facility allows the food bank to increase its capacity to service food pantries and feeding agencies across its seven county region,” Kupchick explained.

The meat supplied by OK Foods is the same quality sold to the restaurants, Kupchick said. OK Foods gave the food bank its choice of meats to pick from, he added. Clemons requested individual bags with two chickens cut into quarters for distribution to families in need. Previously, the chicken meat was received in large cardboard boxes, mostly with leg quarters frozen together.

This new method of distribution to the food bank, with two chickens in vacuum-sealed wraps, is also an effort to encourage family meals at the dinner table, Kupchick said. It is the food bank’s goal to encourage more home-cooked meals, bringing families together for discussions with a chain reaction of accountability to their family and their community, he added.

Many of those in need are are also elderly and disabled, he added. OK Foods has donated to the food bank in years past, but the new pledge of 100,000 pounds a year far surpasses their previous donations, Kupchick noted.

OK Foods follows NPIP standards to maintain a clean Avian Influenza status. All of our flocks are tested and declared negative for Avian Influenza before movement off the farm to the processing plants. We are quick to adapt to outbreak changes over time by carefully monitoring and modifying our level of bio-security to match the current state of the disease.

OK Foods strives to provide healthy chickens and wholesome processed chicken products across the world. When deemed medically necessary, FDA-approved anti-microbial products are used for the prevention, control, and/or treatment of clinical disease under the direct supervision of OK Foods’ fully-licensed, USDA-accredited company veterinarian. The processed chicken meat is tested to ensure it is free of any residual antimicrobial products, meaning OK Foods chicken is antibiotic-free. No added hormones or steroids are used at any stage of the production process. The use of added hormones and steroids is strictly forbidden by the FDA for all chicken produced in the United States.

We strive to offer team members a healthy, safe, and supportive environment in which to work. We believe in putting our people first, and that everyone should be treated with respect. OK Foods has always been a family company, and will continue to operate as such in the years to come.

The safety of our team members is top priority. We are committed to providing all team members a safe working environment, as well as extensive safety training to ensure we understand and can effectively practice safe operating procedures.

Food safety is vital to delivering quality chicken products to our customers around the world. All OK Foods facilities are regularly inspected by the United States Department of Agriculture (USDA). And, as a full-integrated poultry processor, we have implemented food safety auditing programs across all operations to ensure our products meet and exceed food safety standards.

OK Foods operates all of its facilities with the goal of creating the smallest environmental footprint possible by practicing a corporate sustainability initiative. This includes developing protection plans, documenting compliance, maintaining permits, and reporting and tracking our efficiencies.

Our multi-level bio-security plan surpasses industry standards and encompasses all of our facilities. It includes educational programs for producers and vendors to emphasize practices that help ensure the health of our birds and our industry. Our program is consistently audited.

OK Foods understands the importance of ensuring the safe and fair treatment of all chickens. Our strict animal welfare policy mirrors NCC Guidelines and is frequently audited to maintain the highest standards. Audits are performed internally by PAACO-certified personnel (Professional Animal Auditor Certification Organization) and externally by third-party-led animal welfare auditors. Various stages of the production system are audited to ensure proper and humane handling. All birds raised by OK Foods are housed in climate-controlled environments where they enjoy the freedom to roam, eat, and drink at their will, which encourages normal behavior, as well as provides optimal comfort and protects the flock from outside predators, disease, and distress. Our company veterinarian and staff monitor all flocks on a daily basis.